Things to Do in Halifax: Citadel Hill 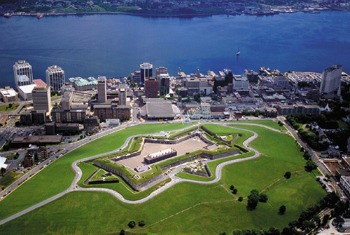 Sitting about 80 metres above sea level, Citadel Hill is one of the most-visited attractions in Halifax. It also represents a large chapter in Nova Scotia’s history.

When the British founded Halifax, they built a fort here to protect the city and its naval shipyard from the nearby French.  In 1856,  the current Citadel (formally known as Fort George) was completed to protect against a land-based attack by U.S. soldiers.

Luckily, it never had to fire a single canon shot in war. Now a part of the Canadian Parks system, the site is a living history museum open to the public.

Actors (students from the local university) serve as the Citadel guards and perform the traditional changing of the guard protocol every hour. Tours are offered several times a day, and the ceremonial firing of the noon gun takes place every day except Christmas.

Throughout the fort, you’ll find audio-visual presentations and exhibits that explain the Citadel’s role in history and highlight what life was like for the soldiers who lived here. In the “Army Museum,” you’ll also find artifacts such as weapons, medals and uniforms belonging to former soldiers. On summer weekends, ghost tours are offered.

The Citadel is open from 9am to 5pm in May, June, September and October and from 9am to 6pm in July and August. The grounds are open from November to May, but no services are offered. Admission prices range from $7.80 to $11.20 per adult, depending on the season.

The Citadel is located at the top of the city, a few blocks up from the harbour. Simply look for the town clock and head uphill. If you are driving, the entrance is at Sackville and Brunswick Streets.

Expect to spend at least 30-45 minutes for a quick walk around the Citadel walls and through the exhibits. Though the grass can get in the way of great panoramic shots of the harbour, the Citadel still provides a nice vantage point for viewing the city. If you have a particular interest in naval history or plan to take a tour, allot at least 2-3 hours for a visit and plan to be onsite for the shooting of the noon gun. Don’t forget to watch the changing of the guard every hour. From May to October, there is a coffee bar serving snacks and drinks.