Getting from Vancouver to Banff (and return) 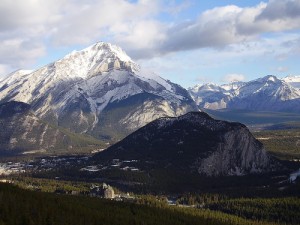 Vancouver is well known for its natural beauty and is also one of Canada’s most important cities. It is nested between the mountains and the ocean, which adds to its charm and offers a variety of things to do no matter when you plan to visit.

Banff is within the Banff National Park, right in the Alberta Rockies. If you love the mountains and the activities linked to it, then you’ll love this area. Make sure to include hikes during summery and skiing during winter. And to relax after the work outs, you can spend some time at the hot springs.

The cheapest option to travel between to Banff is by bus. The single adult fare is CAD $115.40* and the travel time is from 13 ½ h (shortest).

A fastest way to travel is by plane to Calgary and then by shuttle to Banff. The flight time is 1h 20 min and the single fares start at CAD $134. Airport transfer starts at CAD $50.

Vancouver International Airport (YVR) is the most important airport serving Vancouver and is located about 12 km from downtown. The second busiest airport in Canada is hub for Air Canada, Air Canada Jazz and Air Transat.

The closest large airport to Banff is Calgary International Airport (YYC). It is Canada’s fourth busiest airport and hub for WestJet, Air Canada and Canada Express.

Direct flights between Vancouver and Calgary are operated by: Air Canada, Air Canada Express and WestJet. The flight time is 1h 20 min.

On Air Canada Express, single tango fares start at CAD $154 if you plan to fly in late December and CAD $134 for flights in mid-March 2012.

Trains from Vancouver to Banff

The Rocky Mountaineer connects Vancouver to Banff. The journey takes 2 days and the service is available in three levels (classes). The cheapest is the Redleaf Service and the single fare is CAD $859 in April and May 2012 and CAD $1,069 from June to October 2012.

Alternatively, you can take the Vancouver to Edmonton train operated by VIA Rail Canada and then hop on a bus operated by Greyhound Canada for the last leg of the trip.

Buses from Vancouver to Banff

Greyhound Canada operates direct buses between Vancouver and Banff. There are four departures per day from Vancouver, the first being at 12:30 a.m. and the last at 6:15 p.m. The travel time is between 13 ½ h and 15 ½ h. The web only adult single fare is CAD $115.40.

There are also four buses per day departing from Banff, the first being at 1:10 a.m. and the last at 8:35 p.m. Same fares apply.

Driving from Vancouver to Banff

You can rent a car and drive the 847 km between Vancouver and Banff. The shortest route is via Trans-Canada Highway/BC-1 E and takes almost 11 h. Do plan to make a stop along the way.

Note:* at the time the article was published