Getting from Montreal to Boston (and return) 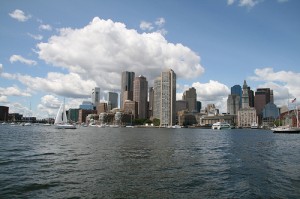 Montreal is the second largest city in Canada and also the economical capital of Quebec province. The city is located on the banks of St. Lawrence River and offers plenty of things to do for those who plan a vacation here.

Boston is the capital of Massachusetts and the most historic city in the USA. It is the ten most popular cities to visit in the USA and offers a variety of museums to visit and plenty of historical sites to check out.

The most popular time to visit Boston is from late May through late September, when the summer weather offers sunshine and comfortable temperatures. If you want to see the superb fall foliage, visit the city in mid-October. The least busy time of the year is winter and thanks to the moderate temperatures you don’t need to worry about the cold that much.

The cheapest and easiest way to travel from Montreal to Boston is by bus. Single fares start at US $86.50* (CAD $88.40) and the travel time is at most 8 ½ h. There is no direct rail link, which means you have to go via New York and spend a night there, practically doubling the cost of travel. Flying is also expensive.

Montreal is served by Pierre Elliott Trudeau Airport (YUL), the busiest airport in the Quebec province and the third busiest airport in Canada. It is located 20 km from the city center and is hub for Air Canada, Air Canada Jazz, Air Transat, CanJet and Sunwing Airlines.

Although Boston is served by three airports, the only airport handling international flights is Boston Logan International Airport (BOS). It is the 19th busiest airport in the USA and is a focus airport for JetBlue Airways. It is hub for the regional airline Cape Air.

Direct flights between Montreal and Boston are operated only by Air Canada Express. If you plan to travel from Montreal to Boston in late December 2011 or mid-March 2012, expect to pay from CAD $248 one way (tango plus fare) on Air Canada Express. The flight time is 1h 20 min.

>>read more about Airfare to Montreal

Trains from Montreal to Boston

There is no direct service between Montreal and Boston (and the other way around). The only route serving Montreal from the USA is operated by Amtrak and goes via New York and Albany. First, you’ll spend 3h 25 min and US $101 (CAD $103.22) for the single ticket from Boston to New York. Then take another train to Montreal and spend 11 h and US $70 (CAD $71.53) one way.

The train ticket might be affordable but you need to consider that you also have to spend a night in New York to catch the morning train to/from Montreal.

Buses from Montreal to Boston

Driving from Montreal to Boston

You can consider renting a car and driving from Montreal to Boston. The shortest distance (498 km) is via I-89 S and takes about 5 ¼ h. Make sure to ask the car rental company whether you are allowed to cross the border with the rental car.
Once you get to Boston, consider dropping the car in a parking lot and using the public transportation, especially if you are heading to the touristy sites.