Getting from Toronto to Calgary (and return) 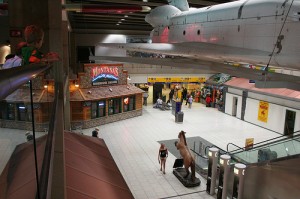 Toronto, the capital of Ontario, is the most populous city in Canada. The city is located on the shores of Lake Ontario and offers a lot of things to do. Travelers can spend some time on the beach or walking in the city. Don’t forget to visit some museums or the zoo.

Calgary is the largest city in Alberta Province and is the gateway into the Rocky Mountains. It is the most likely point of access for Banff and Jasper. While here make sure to check out the Chinatown , some of the museums and parks.

Due to the long distance between the two cities , choosing the means of transportation depends on both the budget and the time available to cover the distance.
Flying is fastest and the single fares start at CAD $287* for early spring 2012. But you’ll cover the distance in less than 4 ½ h.
Buses are definitely the cheapest choice, with single fares starting at CAD $170.10. But the travel time is 2 ½ days.
Since Calgary is not served by a railway station, you need to take the train to Edmonton and then catch a bus for the last part of the journey. It’s expensive and time consuming.

Flights from Toronto to Calgary

Although Toronto is served by three airports, the one handling flights to Calgary is Toronto Pearson International Airport (YYZ), located about 23 km from the city center. It is the busiest airport in Canada and hub for Air Canada, Air Canada Express, Air Transat, CanJet, Sunwing Airlines and WestJet.

Calgary International Airport (YYC) serves the city and the surrounding area and is located about 17 km from downtown. It is Canada’s fourth busiest airport and headquarter for WestJet, as well as hub for Air Canada and Canada Express.

Trains and buses from Toronto to Calgary

Due to service cut backs in the 1990s, there’s no rail service to Calgary. However, you can travel by train on VIA Rail Canada to Edmonton and then catch a bus to Calgary.

Buses from Toronto to Calgary

Driving from Toronto to Calgary

You can rent a car and drive the 3300 km (or 3400 km) between Toronto and Calgary. Both available routes pass through the USA, so make sure to ask the car rental agency weather you are allowed to take the car over the border.

The shortest route is via US-2 W and takes 1 day and 13 hours. Plan to make several stops along the way and spend a night along the route.