Getting from Toronto to Detroit (and return) 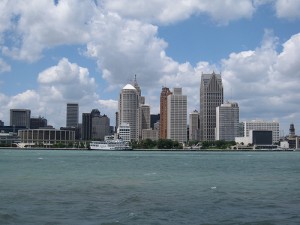 Detroit, a major metropolis in the US State of Michigan, has influenced the world in many ways. It’s directly linked to the automotive industry, the Motown sound , rock music and modern techno. Downtown Detroit is on the riverfront and the Cultural Center is where you’ll find most of the museums.

Detroit is the only city in the US where you need to go south in order to cross the border to Canada.

The Toronto to Detroit route is quite popular among travelers, so if you plan to travel between the two cities makes sure to book the transportation in advance.

The cheapest option for traveling between Toronto and Detroit is by bus. The journey takes up to 6 ½ h and the single fares start at US $64.00* (CAD $66).

Taking the train is more expensive and takes almost an entire day (because there is no direct connection between the two cities). Flying is the most expensive option, but the fastest.

Flights from Toronto to Detroit

While Toronto is served by three airports located in Canada, only Toronto Pearson International Airport (YYZ) handles flights to international destinations. The airport is located about 23 km from the city center and is the busiest airport in Canada. It is hub for Air Canada, Air Canada Express, Air Transat, CanJet, Sunwing Airlines and WestJet.

Flights from Toronto to Detroit are operated by: Air Canada, Air Canada Express and Delta Connections. The travel time is about 1 ½ h.
Should you plan to fly between the two cities for the winter holidays 2011, expect to pay from CAD $360 one way on either Air Canada or Delta. In mid-March 2012, single fares also start at CAD $360 on Delta.

If you look for flights directly on Air Canada Express web site, you can find tango plus (non-refundable, on board snack for free) single fares from CAD $256 in late December 2011. The same single airfare is available for mid-March 2012.

>>read more about Airfare to Toronto

Buses from Toronto to Detroit

Greyhound operates direct buses between Toronto and Detroit. The travel time is between 5h15 min and 6h 35min.

Trains from Toronto to Detroit

It is also possible to travel by train from Toronto to Detroit (and the other way around) but you’ll have to make two stops along the way:

>>read more about Getting from Toronto to Buffalo

Driving from Toronto to Detroit

You can rent a car and drive the almost 400 km between the two cities in about 4 ½ h.

Do make sure to ask the rental company if you are allowed to take the car across the border.