Getting from Toronto to Halifax (and return) 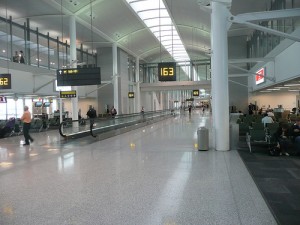 Toronto is the capital of Ontario region and also the most populous city in Canada. It is located on the shore of Lake Ontario , offering plenty of things to do. You can visit the museums, spend time on the beaches, visit Chinatown or Little India for some bargains or just walk in the city.

Halifax is the capital of Nova Scotia , having a rich maritime history. Today, Halifax is a busy port, as well as a cultural and economical hub in Eastern Canada.

If you need to travel between Toronto and Halifax (or the other way around), this articles highlights the possible means of transportation, as well as how much it takes and how much it costs*.

The cheapest option for traveling between Toronto and Halifax is by train (CAD $174.59 one way). However, you’ll be traveling for more than 28 hours.
A quick option is to fly (via Ottawa) on Porter Airlines, or buy a ticket in advance for a direct flight on WestJet.

Flights from Toronto to Halifax

The city of Toronto is served by three Canadian airports but only two of them offer flights to/from Halifax:

, which is the largest and busiest airport in Canada and a hub for Air Canada, Air Transat, CanJet, Sunwing Airlines and WestJet.

Halifax Robert L. Stanfield International Airport (YHZ) serves the city of Halifax , as well as Nova Scotia and the neighboring Maritime provinces. It is the seventh busiest airport in Canada but it’s not hub for any airline.

Trains from Toronto to Halifax 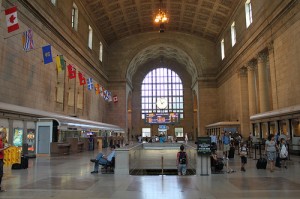 VIA Rail operates trains between Toronto and Halifax.
Trains depart from Toronto Union Station , which is one of the most impressive train stations in North America.
To get between Toronto and Halifax by train, you need to change trains in Montreal. The total journey time (including the stopover) is 1h 4 h 35 min. The single ticket is CAD $174.59.
From Toronto take either train 54 (leaving at 9:25 a.m.) or train 60 (at 11:35 a.m.) to Montreal. In Montreal, take train 14 (which departs daily at 18:30) to Halifax.

Buses from Toronto to Halifax

Driving from Toronto to Halifax

You can rent a car and drive the 1736 km between Toronto and Halifax. The shortest and easiest route is via ON-401E and takes about 21 hours. Please note that this route crosses through the United States so make sure to ask the car rental company whether you can take the car over the border.

Since you’ll be driving such a long route, make sure to plan some stops along the way, maybe even spend the night somewhere halfway between the two cities.