Getting from Vancouver to Montreal (and return) 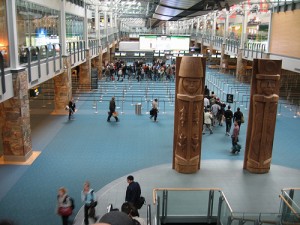 Vancouver is the largest metropolitan area in Western Canada and is well known for its natural beauty. Nested between the mountains and the ocean, the city offers a lot of interesting things to do and see. Thanks to the mildest weather in Canada , the city enjoys warm winters (it hardly ever goes below freezing) and drier summers.

The economical capital of Quebec, Montreal, is also the second largest city in Canada. The city is located on the banks of St. Lawrence River and if you plan a vacation here don’t worry about getting bored. Plan to spend some time in Old Montreal and visit the historical buildings, or just soak up the city’s atmosphere when you walk from sight to sight.

The most important airport serving Vancouver is Vancouver International Airport (YVR) , which is located about 12 km from downtown. It is the second busiest airport in Canada and a hub for Air Canada, Air Canada Jazz and Air Transat.

Montreal is served by Pierre Elliott Trudeau Airport (YUL). It is the busiest airport in the Quebec province and also the third busiest airport in Canada. The airport is located 20 km from the city center and is hub for Air Canada, Air Canada Jazz, Air Transat, CanJet and Sunwing Airlines.

Flights from Vancouver to Montreal are operated by Air Canada and West Jet. The flight time is 4h 45min.
If you want to fly from Vancouver to Montreal in late December 2011, expect to pay from CAD $467 one way on Air Canada. In mid-March 2012, single fares start at CAD $345 on WestJet.
On Air Canada Jazz, the tango (non-refundable) single fare in late December 2011 starts at CAD $349 , while in mid-March 2012 , starts at CAD $248.

Trains from Vancouver to Montreal 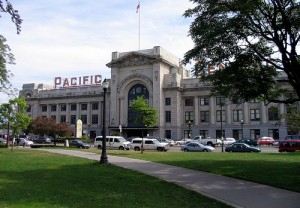 There isn’t a direct train route between Vancouver and Montreal; but you can travel between the two cities with a connection in Toronto. VIA Rail Canada operates trains on the entire length of the journey.

Buses from Vancouver to Montreal

You can travel by bus between Vancouver and Montreal on Greyhound Canada but there are three transfers along the way. There are two buses departing Vancouver each day, at 6:30 a.m. and at 6:15 p.m. The journey time (including transfers) is between 3d 40 min and 3d 2h 35 min. The web only adult single fare is CAD $219.60.
Buses from Montreal leave daily at 7 a.m. and 9 p.m.

Driving from Vancouver to Montreal

According to Google Maps, all routes go through the USA, so make sure to ask the car rental company whether you are allowed to take the car across the border.
Also, since the driving distance is so long, make sure to plan to sleep at least a night along the way.