Getting from Toronto to New York (and return) 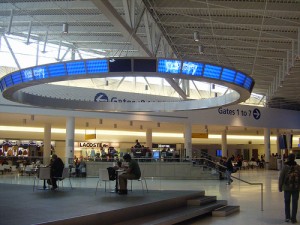 Toronto and New York are two of the most import and largest cities on close to the Eastern Coast of North America. Both cities offer plenty of things to do and there’s definitely no time to get bored while visiting them.

Regardless of why you need to travel between the two cities, it’s important to know that there are plenty of options.

The cheapest and fastest transportation option by land is the bus. The single fare is US $79* (CAD $81) and the journey time is from 10h to 13h, depending on the type of bus, the time of departure and company.
Slightly more expensive are the train fares , US $114 (CAD $116.50) one way, but the train takes longer than the bus.
The cheapest flights can be obtained if you fly from Toronto Pearson to Newark Liberty. Single fares start at US $202 (CAD $206.50).

Flights from Toronto to New York

Toronto is served by three airports located in Canada, but Toronto Pearson International Airport (YYZ) is the only one handling international flights. It is also the largest and biggest airport in Canada. Located about 23 km from the city center, the airport is hub for Air Canada, Air Transat, CanJet, Sunwing Airlines and WestJet.

While New York City is also served by three major airports, the cheapest flights from Toronto Pearson land on Newark Liberty International Airport (EWR). It is located about 24 km (15 miles) from Midtown Manhattan. It is the second largest hub for Continental Airlines. Flights from Toronto Pearson start at US $202 (CAD $206.50) on Air Canada , if you plan to travel for the winter holidays or in mid-March . The flight time is 1h 34 min.

Fights from Toronto Pearson also land on John F. Kennedy International Airport (JFK) , located in Queens, about 19 km (12 miles) from Lower Manhattan. JFK is hub for American Airlines, Delta Air Line and JetBlue Airways. Flights from Toronto Pearson start at US $211 (CAD $216) on American Eagle , if you plan to fly for the winter holidays. In mid-March expect to pay from US $272 (CAD $278) for a one way flight on WestJet. The flight time is 1h 50 min.

LaGuardia Airport (LGA) also receives direct flights from Toronto Pearson. The airport is located on Long Island and is the closes to Manhattan. It is not a hub for any airline. Flights from Toronto start at US $211 (CAD $216) on American Eagle, if you plan to fly for the winter holidays. In mid-March expect to pay from US $272 (CAD $278) for a one way flight on Air Canada. The flight time is 1h 24 min.

Trains from Toronto to New York 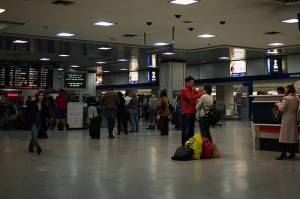 Since you’ll be crossing a border, at the time of booking you are required to submit your date of birth and citizenship , as well as indicate the form of ID you’ll be carrying.

Buses from Toronto to New York

Neon Bus is another company which runs buses, operated by Greyhound, from Toronto to New York. When you run a search, you’ll be redirected to the Greyhound site, so the above times of departures and fares apply.

Driving from Toronto to New York

You can rent a car and drive the 766 km between Toronto and New York on I-86 E/NY-17 E. The drive time is about 8 ½ h but make sure to plan at least a stop along the way.
Buffalo is on route and can offer a nice break.
Make sure to ask the car rental company whether you are allowed to take the car across the border.