Getting from Toronto to Quebec (and return) 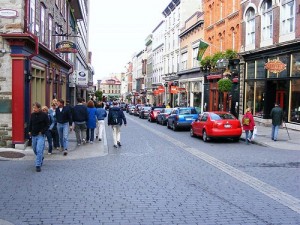 Toronto, the capital of Ontario region, is the most populous city in Canada. Located on the shore of Lake Ontario , the city offers plenty of things to do, ranging from visiting museums, to spending time on the beaches, shopping in Chinatown or Little India or just walking in the city.

Quebec City is the capital of Quebec region. Its Old Town is an UNESCO World Heritage Site. Outside of Mexico, it’s the only city in North America which still has its original walls.

The fastest and cheapest way to travel between Toronto and Quebec is by plane. In about 1 ½ h and for single fares from CAD $59* , you can cover the distance between the two cities.

Flights from Toronto to Quebec

Toronto is served by three Canadian airports but only two of them offer flights to/from Quebec:

Trains from Toronto to Quebec

Buses from Toronto to Quebec

Driving from Toronto to Quebec

You can rent a car and drive the 793 km between Toronto and Quebec. Take ON-401E and then Autoroute 20E. You should be able to cover the distance 9 h but do plan to make some stops along the way.