Things to Do in Vancouver: Granville Island 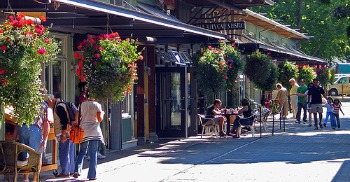 Granville Island (actually a peninsula) is a thriving shopping and cultural district located in False Creek across from downtown. It is one of Vancouver’s top draws for tourists and locals alike.

Once an industrial center where more than 1,200 people made their livings in factories, the island became a shantytown during the Great Depression until the industrial boom of World War II led to it’s re-emergence as a center of industry.

After the war, the need for the island’s factories once again declined, and the island fell into toxic disrepair. Finally, in the 1970s–and amid some controversy–the federal government decided to redevelop Granville Island with space for housing, commerce, and public exhibitions. The redevelopment’s $19 million cost now seems like small change compared to the $35 million the island generates each year in taxes alone. 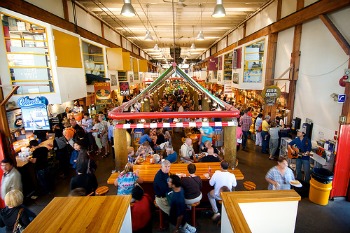 The “anchor tenant” on Granville Island is the Public Market. Part of the market structure dates back to the early 1900s; now rather than a smoke-belching factory, it houses vendors who sell everything from handmade arts and crafts to fresh breads, cheeses and organic fruits and vegetables.

There are dozens of informal dining options: you can eat in the market or out on the pier, and watch the buskers or the tiny passenger ferries that shuttle back and forth in False Creek. Nosh on fresh-made sweet and savory pies, bagels, salads, soups, deli sandwiches, hot dogs, donuts, muffins, fudge, pizza, pasta, burritos and nachos, sushi, gyros, Indian curries, perogies and borscht, Chinese noodle dishes…the list goes on and spans the globe in terms of cuisine. There are over 50 permanent vendors and 100 rotating day vendors in the marker, plus several other restaurants located elsewhere on the island. In other words: come hungry.

To quench your thirst after all that food, check out the Granville Island Brewing Co. Through it has since moved operations to Kelowna, BC  (and been purchased by Canadian brewery giant Molson), it still offers beer tastings and tours at its original 1984 location. Tours are offered daily at 12pm, 2pm and 4pm and cost $9.75, including 3 tasters. (Tastings are also available daily without the tour). The brewery doesn’t have a full liquor license though, so you can only have three tastings or one pint of beer per visit. If you’re still thirsty afterwards, head over to Dockside Brewing for more.

Two companies, False Creek Ferries and Aquabus, provide ferry service from downtown to Granville Island, with fares ranging from $3.25-$6.50 depending on your route. (Discount passes for frequent riders are available.) Simply pay cash once you board.

To get to Granville Island from downtown on the bus, take the #50 False Creek from Gastown, which travels along Granville St., and stops just off Granville Island, at the intersection of Anderson St. and West 2nd Ave.