Whether they’re kissing strangers at midnight in a noisy club or enjoying a quiet game of Scrabble at home with the family, Canadians tend to greet the new year in groups.

Depending on your personality and tolerance for noise, cold, alcohol and sleep-deprivation, there are a bunch of different ways to join the party. Here are the Top 5:

Depending on where you are in the country, you may be able to join a free outdoor public party to ring in the new year. (Typically these family-friendly events are alcohol-free–at least officially. People have been known to pack along their own hot rum toddies.  Just be discreet unless you want to test the limits of Canada’s antiquated public-drinking laws.) These celebrations come and go depending on municipal budgets and volunteers, but among the most enduring are the New Year’s Eve Bash at Niagara Falls and Le Grand Bal in Old Montreal. Check provincial tourism sites for current events listings. Just be sure to bundle up before you head out…

Restaurants often do two seatings on New Year’s Eve and offer elaborate prix-fixe menus. Dine early and then hit the clubs, or take a late table and toast your best beloved(s) with a glass of bubbly at midnight.

For the dance-’til-you-drop crowd, New Year’s is a dream. The big-city clubs book their best DJs and even the smallest small-town bars trot out some special act for New Year’s. Sometimes there’s a fat cover charge and sometimes not. Check city arts-mags, blogs and tourism sites for up-to-date listings (some of our favourites are listed over there on the right). 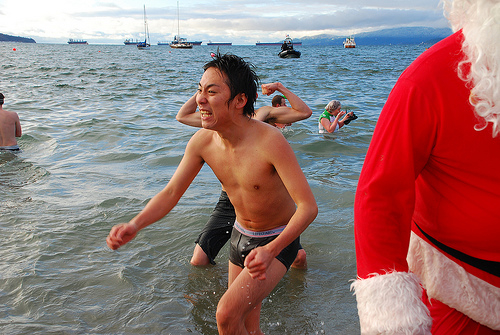 Insane but true: it’s a ritual for many Canadians to cap their all-night revelry with a refreshing dip in a frigid lake or ocean.

Sometimes it’s a informal thing–jumping off the end of the dock at a lake-front cottage, for example–but there are also large organized gatherings such as the annual Polar Bear Swim at English Bay in Vancouver or the Courage Polar Bear Dip in Oakville, Ontario.

January 1 is a national holiday and many clans like to welcome the new year with a mid-day family feast. High-end hotels such as the Fairmont chain reliably offer quality buffet brunches, and Chinese restaurants in Vancouver and Toronto always do a thriving dim sum business that day.

Events and locations change every year. To find out what’s current, check seasonal listings on these official provincial tourism sites.

>>Ready to book your New Year’s travels to Canada? Use the search bar below to find discounted airfares and hotel rooms!