On the Road with Royals: Day 2

I’m walking home after the Canada Day fireworks–which, incidentally, not very many people get to see from the turret of the castle-like Fairmont Chateau Laurier like I did, lah dee dah–and I am thinking about ruby shoes. 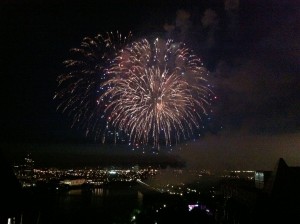 In fact, I have been thinking about ruby shoes all day, ever since Princess Kate stepped onto the escalator that swooped her down into the Great Hall of the Canadian Museum of Civilization wearing a kick-ass high-heeled pair.

The rest of the media world has apparently been obsessing over the maple-leaf fascinator she also wore to accent her simple white dress.

But I’m stuck on the shoes.

The night before, as I considered my own meagre wardrobe options, I’d wondered how Kate would manage the mandatory red-and-white Canada Day fashion colours.

I thought she’d go for a red dress, but no: she proved yet again that nary a Tim Horton’s donut has touched her lips by looking sleek and elegant in brazen white. 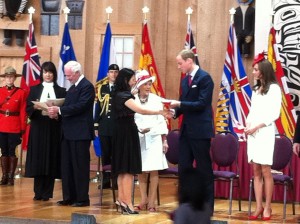 In fact, all the female government staffers who were in place to wrangle the media were also looking trim and lovely in white.

I was wearing white too, but at 9:30 am it was already 30 degrees outside and all similarities ended there.

One of the white-suited staffers was a lovely woman named Nancy Caron who works with Citizenship and Immigration Canada.

During the inevitable long wait before the Royal Arrival, we got to talking about these special July 1 swearing-ins, and how some participants become extremely emotional.

(The selection process for these special events is, incidentally, completely random. If you’re next in line for citizenship, you get the call.)

She said she thought Canadian citizens who had lived away from the country for a while had a much deeper appreciation for their gift of citizenship. She herself had lived and worked in Vietnam for a while. “Until then,” she said, “I didn’t really realize how lucky we are to live in this country.”

And then Kate arrived and I saw her ruby shoes and as the ceremony went on and she and William shook the hand of every new Canadian, I suddenly flashed to the scene in the Wizard of Oz where Dorothy clicks her ruby slippers together three times and murmurs: There’s no place like home.

For people like Siddhartha Kumar, from New Delhi, and Prudence Rajaobelina, from Madagascar, Canadian citizenship was a hard-won privilege–not a birthright.

They were among the 25 people from 14 different countries who were officially welcomed “home” today. I’ve seen the kind of test they had to pass to get in. I and most of my university-educated friends would be lucky not to flunk it. They now know more Canadian history and facts than most native-borns, including the fact that being Canadian involves swearing an oath of allegiance to the Monarch.

Anyway, as someone who was not born with Canadian citizenship, I was terribly moved by the ceremony. (I became a Canuck officially when I was 11.) At the appointed moment, I joined in the singing of O Canada to the amusement–and I suspect downright horror–of some of my media colleagues.

And then Kate and her ruby shoes left, taking Will with them. And we all moved over to Parliament Hill to party like the young country that we are: a mere 144 years old today. 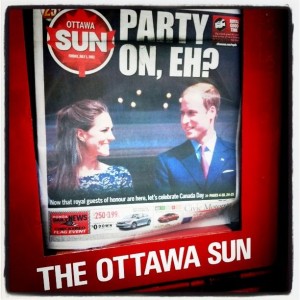 Sometime between the Great Big Sea performance that closed out the afternoon’s stage show, and before the tremendously impressive finale of the fireworks over the Ottawa River, I missed my husband of 31 years who has been teaching internationally for the past nine months.

He has always wanted to see what he called a “real” Canada Day in the nation’s capital. I was sorry he wasn’t there to enjoy every bit of it alongside me.

And I recalled a conversation we’d had a few weeks ago, when he had made the decision to return to work in Canada this fall.

“I’ve had a ruby shoes moment,” he said. “I had to go away to appreciate my home properly.”

He’ll be back in Vancouver before I am. I can’t wait to tell him about my ruby shoes moment.