On the Road with Royals: Day 3 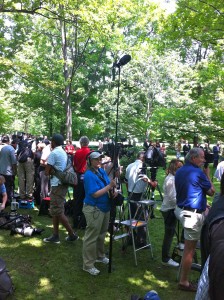 We are waiting, as we do, for Will and Kate to arrive.

Just a few dozen media this time, since it’s “only” a tree-planting ceremony, milling around behind the ropes that define the focus of today’s Royal Activity on the beautiful grounds of the Governor-General’s residence.

(One of the more aggressive female photographers has a big sticker on the telescoping pole she uses to support her long-lensed camera that says: “Behind the Ropes.”I don’t know if it’s the name of a company or what, but it sure sums up life on the road with royals nicely.)

Although the public is usually free to stroll the gardens at Rideau Hall, today’s is a closed event.

Only a handful of special guests will be attending, including several long-married couples, couples married on the same day as the Royals, and a smattering of little Wills and little Kates.

The young guy beside me has been sent by a local radio station and he’s trying to figure out how to make a story out of a tree-planting.

“I mean, there’s just not that much to say right?”

I swear I didn’t mean to lecture him.

It just sort of happened.

We were standing in the dappled light of a grove of trees planted (actually, more like top-dressed) by generations of royalty–and John F. Kennedy, the American president who was practically royalty.

In 1939, the Queen Mother and King George started this Canadian tradition by “planting” a baby sugar maple and baby red oak respectively. Immediately in front of us was the pine oak William’s mother and father had planted in 1983. 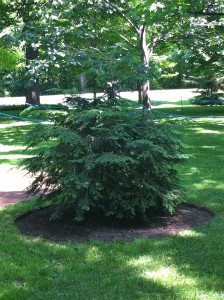 It was bittersweet to be standing in the shade of a tree that had endured even when Charles and Di’s marriage had not.

I pointed to the small eastern hemlock just a few metres away. Will and Kate would soon dump a shovelful of ceremonial dirt on its roots. “This is about doing things for generations we’ll never see,” I said.

“There’s a lot of hope being planted today with that little tree. Treat it right and it will live a long time, like a good marriage.”

The young reporter acknowledged that “that was one way to look at it,” and decided to look for a clip from the long-marrieds in attendance–couples like Edna and CB Marsh, together 70 years, and George and Marie Kheirallah, married 50.

The Royals arrived on time. The piper that led them to the grove was so off-key that we all winced.

But then they were in view and all was forgiven. Kate made grey look good and the height of her reptile-skin heels made her calf muscles pop.

There is something quite special about the dynamic between Will and Kate.

You feel it more than see it. The British media on the tour constantly whine about how Will doesn’t ever touch Kate, but let’s face it, one casual or mildly risque caress and they’d have it slapped up on their front pages so fast your head would spin. 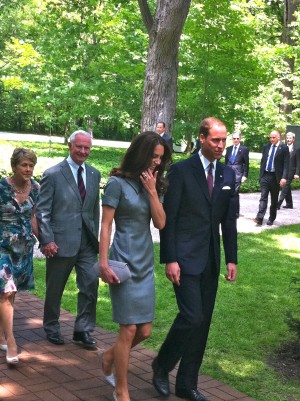 I don’t know if it’s protocol or commonsense, but he doesn’t touch her in public.

But it’s little things, like when she betrayed her amusement at his appalling French during his welcome speech, or when he leaned in to comment on certain performances at Canada Day, that make it clear this couple is deeply connected.

There is a trust and ease between them that is palpable. They so obviously enjoy each other. May it always be so.

Once the tree was tucked in–Kate looked like she’d never held a shovel in her life–they went walkabout, demonstrating a particular ease with children that makes me hope there may be a Made-in-Canada baby yet.

But the most moving moment of this intimate morning was one that almost might not have happened except for a chance encounter between two strangers with an enthusiasm for motorcycles–and taking care of others.

Tara Tucker is a palliative care doctor in Ottawa. When one of her patients asked for her help to attend Canada Day to see the Royal Couple, she looked for guidance from an event planner she had met while taking a motorcycle training course.

The planner, recognizing that the frenzy of Canada Day might be too stressful, went one better.

Will and Kate met cancer patient Terry Joyce at the end of their Royal Grove walkabout. He is very near the end of his fight with cancer. As William was turning to greet him, a beam of sunlight suddenly broke through the trees and lit the entourage. “It’s a sign,” he said. When the couple left, he cried hard. 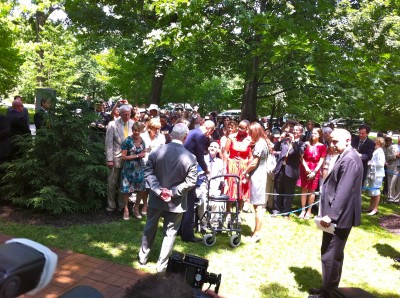 “This was more than anyone could have hoped for,” said his doctor. “The dying have dreams too. Terry is fully living even as he is dying.”

In the end, I don’t know what you could possibly say about a Royal Tree Planting.

Except that lifetimes are short, good endures and we owe a duty to those who come after.

Oh, and high heels are dumb for gardening.