On the Road with Royals: Day 5

The first time Will landed his Sea King helicopter belly first on the lake at Dalvay-by-the-Sea this afternoon, I can safely say the assembled hordes were suitably impressed. 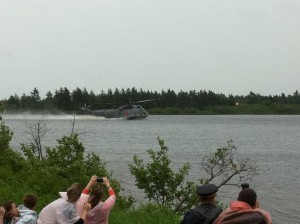 He was being trained in a so-called “waterbird emergency landing procedure,” an apparently useful skill when engines fail and other things go bad. Will is, as one government staffer dryly noted, not merely “an ornamental officer.”

So even the second and the third time he nailed it, we were happy for him. I mean, God didn’t really intend for that bird to swim.

It makes your heart jump a little to see a helicopter aiming for water, even when you know it must be reasonably safe or they wouldn’t let the future King of England anywhere near the project.

But somewhere after five times, we in the media pen–a highly distractable lot at the best of times–became bored. Apparently Will could do this all day. (In fact it was just an hour, the length of time required for him to receive the appropriate military credential for his efforts.)

Let me set the scene a little here. 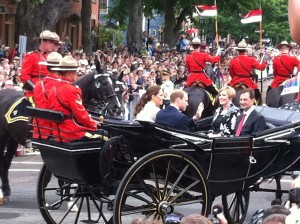 After a formal Welcome-to-PEI ceremony at Province House (where the Founding Fathers wrote Canadian confederation into existence), we’d all raced up from the tiny, charming capital city, Charlottetown, to this picture-perfect seaside resort.

A spattering of rain in the morning turned a little more aggressive by mid-afternoon. We were getting cold and hungry and increasingly damp.

When Will did his first pass, landing the helicopter on water then lifting it up again to circle the lake, a very funny American writer said out loud what many of us didn’t yet know we were thinking:

“Now that,” she said, “is some awesome bad-assery.”

By the third pass, she joked: “He looks so cute in a helicopter.”

And then we were off to the races. There are not many women in the media pen, so it was refreshing to slip into some Sex-in-the-City style banter.

“This has got to be hard for mere mortal men,” I said. “‘Here’s this guy who flies rescue missions by day and raises billions for worthy causes by night. So how can a normal guy compete when his wife asks, ‘What did you do today honey?'”

We riffed on that for awhile, imagining Kate introducing Will to new acquaintances: “My husband the helicopter pilot is the Future King of England. Tell me, what does your husband do?”

But then we conceded that Kate was a bit of a prize too. At which point, a nearby radio guy jumped in.

And to my amazement, he and yet another male journo, began a lengthy and rather serious conversation with us about how Kate was making “femininity” sexy again.

They used words like elegant and refined and and intelligent and classy. They wished aloud for the passing of the cult of Megan Fox, who they dismissed as trashy. They admired her obvious commitment to fitness (which is to say that no, they did not find her too skinny–damn), and to her new husband.

“Grace Kelly all over again?” asked the American writer.

Right about then, the chopper exercise ended and the dragon boat race across the lake got underway–Kate rowing in one boat, Will rowing in the other.

Will won. Or maybe Kate let him. (Probably the latter, for as Premier Robert Ghiz, husband to Dr. Kate Ellis Ghiz, had publicly advised William earlier this day: “Kates are always right.”) 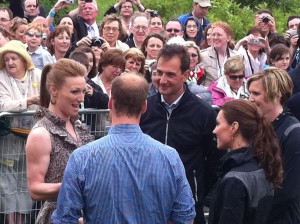 When the two of them came back on land wearing civvies–Kate can even make a PEI-branded soft-shell jacket look good–they looked like something out of a Ralph Lauren ad. They were glowing and gracious and damn good sports.

They were greeted by another good sport, PEI-bred Olympian Heather Moyse (see photo right), and then spent another wet hour meeting their public, many of whom had waited for hours and were now sopping.

The thing is, they could have bailed on the walkabout. They could have lingered a little too long in the culinary tent or just hustled through their walkabout. (And at that point some of us in the media pen wished they would.)

But they didn’t because they take their work seriously, and a Royal Tour is nothing if not hard work. 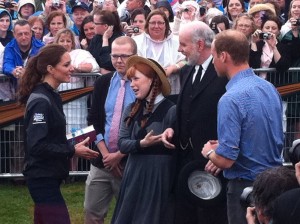 En route they paused to listen to pipers and singers, and watch steppers and First Nations dancers bravely performing in less-than-perfect conditions.

The Dalvay visit ended with a meet-and-greet of PEI’s iconic Anne of Green Gables–or at least with young actress who plays her character in the long-running theatrical production in Charlottetown.

Now, I admit I am overtired and therefore prone to emotional outbursts, but it made me all soft inside to watch that encounter. “Anne” gave Kate a copy of the book, which some media outlets claim is a favourite of hers.

Frankly I don’t care if Kate can tell Matthew from Marilla.

What resonated for me was how much like Anne is PEI herself–welcoming, loyal, practical and pretty–and how much that makes PEI and the Royal Couple kindred spirits.