On the Road with Royals: Day 7

It was a good day, made that much better by a late start and just a teeny amount of tequila at dinner.

I’d just left Blink–a stylish restaurant on Stephen Avenue in downtown Calgary–after a long meal with colleagues who had finally reassembled from points north and east.

We’d spent a good few hours trading war stories–the cameraman who jumped off a podium into a secured zone and was lucky to be alive, for example, or the nervous young musician who accidentally (and unforgettably) welcomed “the douche” to Canada.

By the time I left, we’d sorted the details for tomorrow’s arrival of Will and Kate. Everyone had their marching orders.

I left ahead of the pack to get back to write about my visit to the Alberta Boot Company, the local manufacturers of the cowboy boots Will and Kate will wear during the Calgary Stampede. 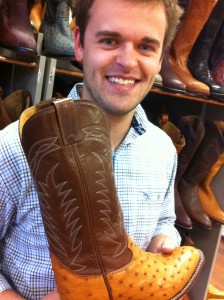 A Twitter friend had tipped me off that the Calgary company had a history of giving Royals the boot–or a pair of boots, actually.

Princes Charles and Andrew received a pair, as did Lord Mountbatten, who the founder had met while flying Spitfires in Burma during WWII.

In 1978, after two years of trying to build a better boot, Clem Gerwing–now 91–morphed his long-time wholesale business into the current company which now sells thousands of pairs of locally made cowboy boots annually.

(People from all over the world love these boots; Germans in particular can’t get enough of them.)

After Clem came his son Tim, now retired, and then his son Ben, just 25. It was Ben who this afternoon showed me a version of the boots Kate and Will would wear–dubbed the “Commonwealth Boot” by his Grandpa.

“He called it that because the ostrich on the front comes from South Africa, and the kangaroo at the top comes from Australia, and the rest is from Canada.”

When details of the Royal Itinerary were announced, the family approached Alberta’s protocol office to explain their history with the Royals. This morning Ben delivered two pairs of boots to the hotel of a tour aide.

So, anyway: I’d left the restaurant thinking about the Royals’ beautiful new boots–worth about $1,000 a pair–and the gorgeous symmetry of a family business gifting its wares to another (ultimate) family business. And that was going to be the gist of this post.

But on the way back to the hotel I ran in to someone who had a better story. 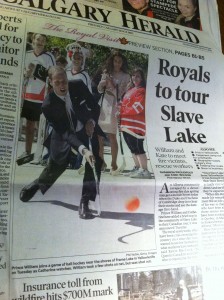 They had just returned from the Slave Lake–the tiny northern Alberta community recently ravaged by fire.

They told me how Kate and Will had made a last-minute decision to fly there from Yellowknife in the Northwest Territories for a short tour.

How the town had less than 24 hours’ notice to prepare, and still roughly 3,000 people had gathered to greet the couple.

How the Royals had travelled by bus with their small entourage to view the devastation.

And how much it had meant to the battered community.

“People had tears in their eyes. They said, ‘We haven’t smiled for a long time. And they gave us a reason to smile again.”

Juicy rumour had it that Kate and Will headed to Jasper this afternoon to enjoy some brief downtime. Even juicier: with a private helicopter at Will’s disposal. But the Toronto Sun is already reporting something different…

Wherever they ended up, I hope they enjoyed a relaxing evening. I sure did.