On the Road with Royals: Day 8

When it comes to all-expenses-paid holidays, the Royal Tour ain’t one.

I am getting cranky with the haters who keep hammering the line that William and Catherine Windsor are enjoying a honeymoon at the expense of Canadian taxpayers. 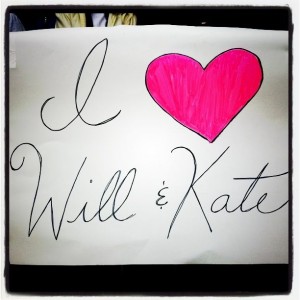 Yes, it will undoubtedly cost more than a million government dollars to host these two Royals.

And yes, they are glimpsing some mighty pretty scenery and sampling some interesting cuisine and culture as they dash here and there about the country.

But where they go, so goes the international spotlight, burnishing Canada’s reputation as a fine place to take a holiday and maybe drop a buck or two.

You can bet bookings just went up at Banff’s historic Skoki Lodge, where the Royals last night passed their one (one!) free night together.

As the saying goes, money can’t buy the kind of publicity that comes from having Will or Kate cast eyes on your product, person or service.

And then there’s the other stuff: foundations run by the Royals to benefit worthy causes around the globe, including Canada, and state gifts that honour the Duke and Duchess of Cambridge but pack a punch closer to home.

Like many modern young couples, the Royals eschew stuff for substance. When they wed, they asked countries to contribute to worthy causes in their own back yards instead of presenting traditional wedding gifts such as, in Canada’s case, a cedar canoe.

Just such a “legacy gift” was announced tonight during an official ceremony at Calgary’s BMO Centre, where the couple was officially welcomed to Canada by Prime Minister Stephen Harper, himself a good-ol’ Alberta boy.

(The speechifying was preceded by some camera-worthy merriment: Kate and Will rode in on a vintage stagecoach wearing blue jeans and pointy boots, and Will, looking decidedly awkward, was schooled in appropriate chuckwagon-racing technique. The crowd did not go wild. I think he may prefer the polo field to the bull pen.)

Harper tonight announced the creation of The Duke and Duchess of Cambridge’s Parks Canada Youth Ambassadors Program, “a special gift in honour of the couple’s first Royal Tour of Canada and to mark the 100th anniversary of the founding of Parks Canada.” 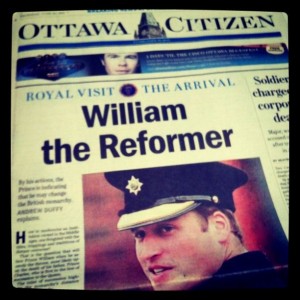 It’s a clever idea meant, I’m sure, to address the fact that visitation rates are falling in national parks, in part because many immigrants arrive without a sentimental attachment to parks based on years of summer holidays sharing leaky tents and tippy canoes.

The idea is that each summer two “youth ambassadors” will travel across Canada visiting the country’s national parks and historic sites, and sharing their experiences via social media channels. With the right talent in place–and no meddlesome government middlemen controlling the message–it just might inspire a new generation of Canadian youth to go outside and play.

Anyway, the point is that Canada’s investment in the Will and Kate Travelling Road Show is, to my mind, defensible.

The monarchy may well be able to justify its continued existence if this stepped-up commitment to philanthropy holds. Will and Kate are a fundraiser’s dream patrons: members of the Santa Barbara Polo Club donated $100,000 each to the Duke’s charitable trust for the privilege of playing with him when he goes to California later this week.

Noblesse oblige is an old concept, but Will and Kate are giving it new life.

As one journalist recently quipped: Welcome to Monarchy 2.0.