On the Road with Royals: Day 9

Will and Kate have left the building. 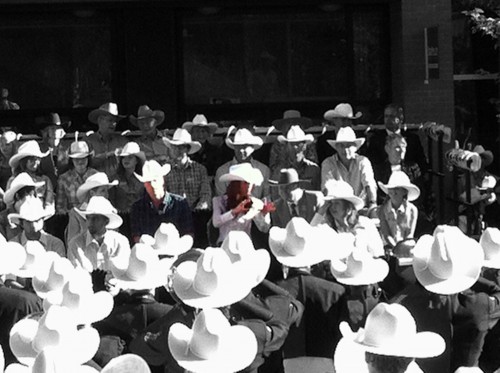 For me and many of the other media hacks whose pleasure and privilege it has been to follow them on their nine-day journey around Canada, it was a bit of a “here’s your hat, what’s your hurry?” scenario.

At the official departure ceremony at Calgary Rotary Challenger Park this afternoon, the media mob had been herded into position out on a grassy playing field a full two hours before the couple’s expected arrival–expected being the operative word.

(Yikes. On the climb out of Calgary, this plane is being swatted around by the same sort of winds that chilled us to the bone on the media dais today.)

Half the media herd had already decamped for California, where the Royals were scheduled to arrive later in the day.

Those who were left were visibly weary and decidedly impatient for this “gong show”–as one young print reporter so eloquently described the tour–to drop the curtain.

We killed time sharing memorable moments: even the most hard-assed journalists on the trip had been deeply touched by yesterday’s encounter between Kate and six-year-old Diamond Marshall, a little girl battling cancer whose own mother had recently succumbed to the same disease.

(When I am not about to fall over with exhaustion, I’m going to write one more post with my Top 10 Royal Tour moments. Please stand by.)

The Duke and his Duchess arrived roughly on time. Kate’s elegant red coat-dress blended with the red carpet so perfectly that is would later drive the photographers crazy with colour-correction challenges.

The highly militaristic closing ceremony offered a lot of what photographers refer to as “face time”–that is, long stretches when the Royal celebs were standing still and facing forward for easy shooting. So much face time, in fact, that the perpetual hum of a hundred high-speed shutters clicking all at once suddenly stopped.

Everyone had had enough.

It was time to go home.

I’ve gained a number of new Twitter followers and seen a significant increase in engagement with many long-time Facebook fans and blog readers this week.

I want to thank everyone who has made time to read these posts and especially those who offered support and kind words. It made today’s 4:30 am start that much more bearable I can assure you!

I also want to give a shout to Maurice Li, my compatriot in this project, and the Keep Exploring team who every day demonstrated extreme collegiality and professionalism. 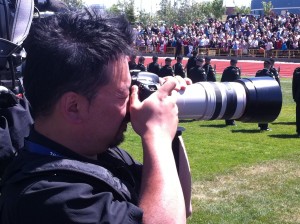 Just before I boarded this flight I received a tweet from Alexandra Lawrence (@GoingKamping), asking:

Are you sad to see them go?

I couldn’t reply in the required 140 characters, so let me say here: no.

I am tired. They are tired. They comported themselves superbly the entire time. (We need not fear scandalous toe-sucking photos from these two now or in the future.)

I know how hard it was to do this tour with the odd margarita and vulgar joke mixed in to get me through. I can’t imagine what it would be like to do it straight, with cameras clicking every time I yawned or adjusted my bra.

So, no, I am not sad to see them go. Let them git while the gittin’s good.

But also, yes. I am sad this tour is over.

Prince William and Catherine brought out the best in Canada, and in this Canadian in particular.

I have learned so much and laughed so hard in the last 10 days.

I have once again experienced this country’s unique regional hospitality.

And I have been reminded why I wanted to write about Canada in the first place.

Thank you for visiting and please come back soon. Royals too.