On the Road with Royals: Day 1

Ada Bosworth, of Houston, Texas, arrived at 6:35 am this morning with her kids, Alex, 10, and Cassandra, 8, to claim her front-row position behind the barricades at the memorial where Prince William was scheduled to lay a wreath in the mid-afternoon.

She was still standing and still cheerful when I arrived seven hours later to take up my position in the media pen ahead of the barricades. 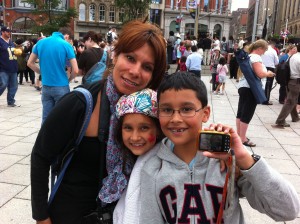 It was worth it, said Ada, for a chance to see–and possibly meet–“real royalty.” Young Cassandra, a Cinderella devotee who “always wanted to be a princess and live in a big castle and enjoy it,” was keen to shake Kate’s hand.

A little further away, on the approach to Rideau Hall, where the Royals would be officially welcomed to Canada after the wreath-laying ceremony, waited another mother.

She wagered the chance of a Royal Walkabout was greater at the welcome ceremony than at the memorial. And so, with her mom and dad and two daughters Kathryn, 3, and Emily-Grace, 5, she waited.

You never really see the messy bits of a Royal Occasion such as Will and Kate’s recent wedding, or the Queen Mum’s funeral. But as anyone who has ever put on a show, or organized a surprise party or even hosted a Thanksgiving dinner knows: life abhors a schedule.

(Note to self: pee before you enter the media pen, because once you’re inside you’re not getting out any time soon.)

A few days before this party started, I received a briefing document detailing–and I do mean detailing–the Royal Couple’s nine-day itinerary. It portions Will and Kate’s Royal Life into Royal Minutes, like this:

You can see where this is going, can’t you?

Not half an hour after landing in Ottawa, Will and Kate were late. Off-schedule. Running behind.

When they did arrive, there was a great whoop of joy from the assembled throngs, but like good Canadians everyone quickly settled into the solemnity of the occasion. They are an even more gorgeous couple in person than on TV, and when you consider that TV adds 10 pounds, they are probably both too skinny.

And so they laid the wreath–bearing a card that moved me deeply, written, apparently, in the same hand that wrote “mummy” on another card for another wreath many years ago. 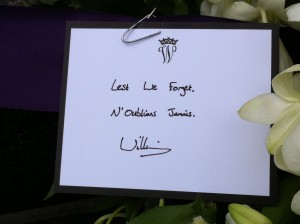 And then they channeled Di and worked their crowd magic, first with the Silver Star mother and other assembled VIPS. And then they went walkabout.

Protocol says media can’t “record private conversations of the Royal Couple,” but that “journalists can follow behind the entourage to address persons who have met Their Royal Highnesses.”

David Diakowich and his partner Lionel Leston, from Winnipeg, got a word, as did 19-year-old “royal-obsessed” student Jennifer Baldwin who drove for 21 hours from Iowa for the chance.

And, happily, so did little Cassandra Bosworth and her brother, whose maple leaf cheek tattoos were admired by Kate.

All of which meant, of course, that they were even later for their Rideau Hall event.

Which meant, of course, that something had to be cut if order was to be restored to the Royal Universe, and you can bet it wasn’t going to be cut from the Prime Minister’s portion of the program.

And so it was that the Dever clan did not get to meet their Royals this time. (Christine had had a moment with the Queen when she visited Ottawa in 1984, and grandpa Karl saw Princess Elizabeth when she came through Winnipeg in 1951.) 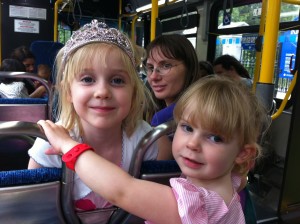 But when I met them on the free public shuttle bus at the end of the day, they were sanguine about the missed opportunity.

It had been enough to be part of the excitement. The little princesses were tired.

Tomorrow is Canada Day. I will be checking off a bucket-list item when I sing O Canada on Parliament Hill at noon with 200,000 other voices.

Canada will be 144. Coincidentally, Princess Diana would have turned 50.

I like to think she will join us in spirit tomorrow to celebrate all the gifts we’ve been been given as a nation–including young Will and Kate.