On the Road With the Royals: Day Zero

A long white tongue of paper pokes from the maw of the Air Canada self-serve kiosk and surprises me with its oracle-like message: 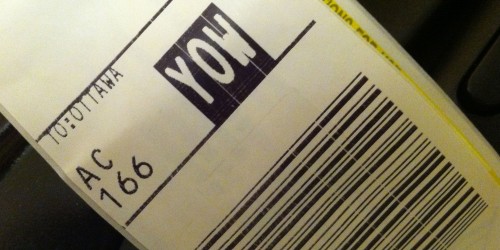 As in Ottawa International Airport, of course.

LOOK AT YOU, YOU’RE REALLY GETTING ON A PLANE TO JOIN THE ROYAL TOUR OF CANADA BY PRINCE WILLIAM AND HIS BELOVED KATE!

I fuss the luggage label around the handle of my suitcase and think: YOW indeed.

Just three weeks ago, I picked up the phone one Friday morning to hear the voice of a stranger ask, “Would you be interested in blogging the upcoming Royal Visit of the Duke and Duchess of Cambridge?”

Um. Yes please. Also, thank you. And would you like to see my curtsy?

Long story short, I got the gig. My odd combination of skills (journalistic and social media), obsessions (Royals and Canadian travel and tourism) and career highs (Expo 86 and the 2010 Winter Olympics) converged on the radar of the people who make it their business to promote Canada to the world.

Along with superbly talented Vancouver photographer Maurice Li, I was accredited to hit the road with Will and Kate and blog the whole excellent adventure here, there and everywhere–in my own voice, and without editorial interference.

So how, exactly, is this going to work? I don’t really know since it’s never been done before.

What I can tell you is that I will be posting short, fun and quirky real-time comments, photos and observations several times daily to my personal social media channels including Twitter and Facebook, as well as the Canadian Tourism Commission’s Royally Curious Facebook page.

And each night of the nine-day tour, I’ll aim to post longer, more reflective pieces here. I hope you’ll look at one or all of these channels–and share and comment freely.

Finally, I think it’s important to explain a bit about the lens through which I will be viewing this trip. Although I trained and worked as a journalist for many years, a blog is, by definition, a highly personal and therefore biased publishing platform.

And just so we’re all clear going in, here are my biases–at least the ones I’m aware of:

That’s pretty much all you need to know about my Royal Fetish for now.

Now, after a day of early morning radio interviews (thanks CBC!), cross-country flying in rough air, late-night briefings over a Tim Horton’s turkey/bacon sandwich and more than a dozen social media posts…I need to go to bed to get ready for Day 1 in the nation’s capital.

Let me know if you have questions or ideas or particular topics you want me to blog about during the tour. Leave a comment here, or send a Twitter or Facebook post. I promise to respond.

And here’s a last tip: to follow the Royal Couple’s itinerary (a to-the-minute schedule that has quelled my desire to be a real princess, possibly forever), download the free Royal Tour app for your iPhone, iPod Touch or iPad.

Thanks for reading this far! Since I gave my lady-in-waiting the night off, I have to go now and unpack…