Best Bet: Seattle to Vancouver via Train or Bus

Seattle is Vancouver’s American cousin, just a little south of the Canada-US border in the region generally known as the Pacific Northwest.

Especially for American travellers, it sometimes makes budget sense to find a dirt-cheap domestic flight to the Seattle-Tacoma International Airport (aka Sea-Tac), and then rent a car and drive across the line to Vancouver. After all, it only takes three hours.

At least, that’s what the tourist brochures will tell you.

The problem is, once you factor in realities like rush-hour traffic and border line-ups, it never takes just three hours. And once you’ve actually arrived in Vancouver, you’re unlikely to need a car anyway since it’s so easy to get around on public transit.

Better to take the train or bus and really enjoy the journey. 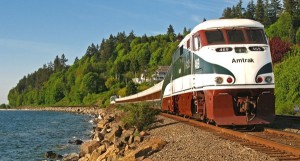 Amtrak Cascades routes between Eugene, Oregon and Vancouver, BC via Seattle and Bellingham. The train offers several classes of service but the view is one-size-fits-all: you just can’t get this sort of spectacular coastal scenery in a car hurtling along the highway.

Amtrak recently added a second train to the route, so there are now several departures from Seattle every day. The one-way trip can be had for less than $40 CDN, and takes roughly four (relaxing) hours. Bonus: the SkyTrain is a short walk from the Vancouver train station and will put you into the heart of downtown Vancouver in just a few minutes.

By bus: Quick Coach and Greyhound

With a little advance planning, Quick Coach can whisk you between SEA (or downtown Seattle) and Vancouver for under $90 CDN return. These comfortable buses stop at YVR, downtown Vancouver and the cruise ship terminal. Bonus: there’s free wi-fi on board so you can amuse yourself even if traffic is bad. Reservations are mandatory.

Greyhound buses leave from downtown Seattle and the Amtrak station and you can find one-way non-refundable fares (online only) for under $30.

>>Use the booking tool above to find cheap flights to Seattle.

>>Click here for more ideas on how to find cheap airfare to Vancouver.