Things to Do in Halifax: The Maritime Museum of the Atlantic 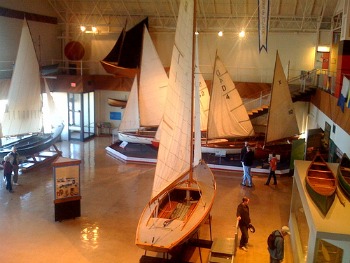 Though a small version of the museum opened at another location in 1948, the museum was born in its current incarnation in 1982, at the former site of the Robertson & Son Ship Chandlery and A.M. Smith and Co. Properties on the Halifax Waterfront. Now it offers multiple floors and several permanent and rotating exhibits that showcase the marine history of Nova Scotia.

Permanent exhibits include educational displays on the Canadian Navy’s history and ships, models of some of the greatest steamships and sailboats ever to ply the waters, and displays of artifacts from some of Nova Scotia’s greatest shipwrecks.

The two most popular exhibits, though, are the ones explaining the horrific Halifax explosion and spotlighting Nova Scotia’s role in the Titanic disaster.

The museum has what may be the best collection of wooden artifacts from the Titanic. As Halifax was the closest major port to the Titanic when it sunk, much of the wreckage was brought here and is now on display at the museum. Guests can even sit in a perfectly preserved deck chair from the ill-fated ship.

The Halifax explosion exhibit is equally fascinating and haunting, illuminating a major event in the city’s history that most visitors know nothing about. In 1917, during WWI, Halifax’s port was an assembly and departure point for many transatlantic ships which carried supplies, food, soldiers and ammunition to Europe.

On the morning of December 6, 1917, two ships laden with ammuntion collided in the harbour, causing an explosion that killed  2,000 people, injured 9,000 (including 200 blinded by glass), and destroyed 25,000 homes. Six square kilometers of the city were completely flattened by the blast.

The exhibit, opened in 1987, was originally designed to  be temporary, but the public response was so overwhelming that it remained open until the modern exhibit,  “Halifax Wrecked,” could be opened. Beginning with the details of the circumstances that caused the tragedy, it then focuses on the individual lives that were affected. Using personal effects, memoirs, and photos, the exhibit brings the tragedy to life in heart-breaking detail, giving visitors a look at both the horrific devastation of the explosion and the slow recovery and rebirth of the city.

Hours vary with the season. The museum is open year round Tuesday through Saturday from 9:30am to 5pm (in winter) or 5:30pm (summer) with additional hours during summer months. Admission also fluctuates from $4.75 for adults from November to April, to $8.75 for the rest of the year. Children and seniors get a discount and kids under 5 are free.

Grey Line hop on/hop off buses stop at the Maritime Museum, so if you have a full day of sightseeing planned, you can save your visit for a stop on the bus tour. Plan on spending at least an hour at the museum, even if you are only interested in the Titanic and Halifax Explosion exhibits; both take time to fully appreciate and digest.

While these two sobering exhibits will fascinate the adults, they both may lack the visual stimulation for very young kids (luckily other exhibits do the trick). You may want to plan your visit at a time when your kids will better appreciate the exhibits.