Things to Do in Halifax: The Museum of Immigration at Pier 21 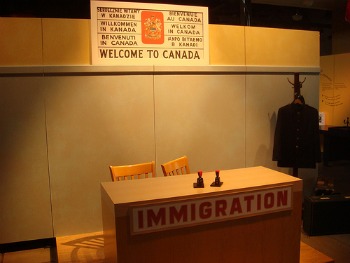 Located in a beautiful historic building in Halifax, the Museum of Immigration at Pier 21 is a national treasure.

Paying tribute to the “1.5 million immigrants, war brides, displaced people, evacuee children and Canadian military personnel who passed through Pier 21 between 1928 and 1971,” the museum tells the story of those who came to Canada looking for a better life or who –as in the case of the 500,000 military personnel who departed from Pier 21 during WWII– left behind all they knew in order to serve their country.

Among the many permanent and temporary exhibits are a 30-minute multimedia presentation telling the history of Pier 21 from the late 1920s through the post-war years; a replica of the immigration hall as new arrivals would have seen it;  and dozens of stations that featuring fascinating vignettes and accounts from immigrants in their own words (read by actors).

Adult admission is $8.50, with discounts for seniors and children; kids under 5 are free. Hours vary with the season. From May to October the museum is open seven days a week from 9:30am to 5:30pm; during winter it is open Tuesday to Saturday from 10am to 5pm

The Museum of Immigration is located at 1055 Marginal Road, a short walk from the Westin Nova Scotian. There is a large parking lot with rates of $1.50 per hour (up to $10 per day) and the area is served by Metro Transit’s Free Tourist Shuttle Bus (between July and October) and by the 8 Waterfront Bus.

For a brief overview, expect to spend about 30-45 minutes at the small museum, though you could easily spend an hour or two if you were to examine each exhibit carefully. Before or after your visit, stop at the nearby Halifax Seaport Farmer’s Market or have a few beer samples at Garrison Brewing Co.