Things to Do in Nova Scotia: Rughooking with Deanne Fitzpatrick

As a kid I was never happier than when I found myself settled with a big box of Crayola crayons and fat stack of blank paper. All those colours, all that creative possibility—and guaranteed placement on the front of the family fridge. 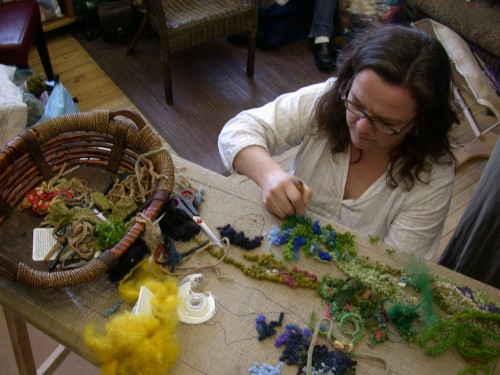 But somewhere along the line gold stars and grades started to be attached to my artistic efforts.

And since my level of talent was apparently more in line with bronze stars, I metaphorically packed up my crayons and went home.

It was almost 30 years later, on a chance visit to the Art Gallery of Nova Scotia on Canada’s Atlantic coast, that I first encountered the wildly colourful and creative hooked rugs created by celebrated Canadian folk artist Deanne Fitzpatrick.

There was something so spontaneous, so whimsical and free in those textile canvases that I once again felt the urge to hunt down a box of crayons.

As it happened, I went one better: when I returned home to Vancouver, I signed up for a one-day rug-hooking workshop offered through a continuing education program. I knew in the first hour that this was my creative homecoming.

A craft of poverty

Rug-hooking—the simple, repetitive act of pulling woollen strips through a burlap backing to make mats and rugs—has vague origins; if it wasn’t born in Atlantic Canada, then it definitely came of age here.

Once scorned as a craft of poverty, hooking has in recent years found new fans, thanks in large part to Newfoundland expat and Nova Scotia resident Fitzpatrick, whose beautiful rugs and books have earned a loyal international following. 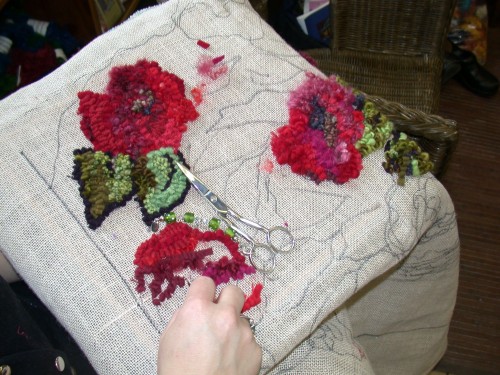 And so it was that I, a relative newbie to the craft, left my family for a week one recent spring day to fly across the country and join a company of rank beginners and skilled pros in Fitzpatrick’s studio.

We came from across North America, and some of us had been many times before.

One repeat visitor, who returns annually with a close friend, joked: “We love Deanne so much that we like to say, even if she taught plumbing, we’d still come to her workshops.”

On my way back to Vancouver, I stopped once again in Halifax to see the Nova Scotia gallery’s expanded folk art exhibit and was delighted to discover an early 20th century piece by Francis Silver Hansport depicting a women’s sewing circle and posing the question:

“One man has typewritten 4,917 words in an hour, but could he keep up with the conversation at a womans [sic] sewing circle [?]”

I laughed. Having just spent several happy days in the company of a dozen deep-thinking, fast-talking, wise-cracking women, I recognized Mr. Hansport’s question as a rhetorical one.

We came together as strangers, ostensibly for different reasons—to learn technique, to be inspired, to improve our colour sense—but the bonds of intimacy formed quickly.

Fitzpatrick, a former counselor who listens carefully to the silences between the chatter at her workshops, told us the real reason we were there: “To get permission to keep doing what you’re already doing; to keep playing.

Has it been a long time since you’ve given yourself permission to “keep playing”? What “lost art” would you like to reclaim? Please leave your comments below!

Related:
>>About Nova Scotia
>>Airfare to Halifax
>>Things to do in Halifax