More than a century ago, the fledgling nation was unified by a a ribbon of track laid coast-to-coast. In 1881, the federal government, anxious to bring the West into Confederation and shut out U.S. expansionism, fast-tracked a cross-country railway. 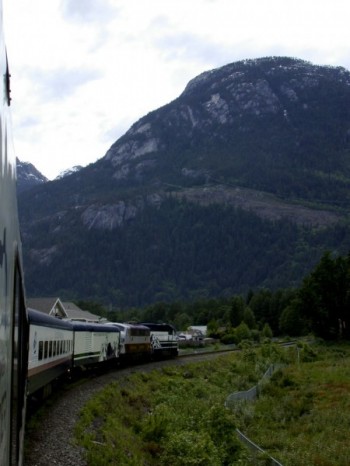 It was a daunting task, fraught with scandal and financial instability, but with the pounding of the Last Spike at Craigellachie, BC in 1885, Canada suddenly became an international tourist destination famous for its moose, mountains and Mounties.

The grandeur of Western Canada’s once-inaccessible Rocky Mountains was now available to anyone who could afford a train ticket–and a night or two at the castle-like Banff Springs Hotel (today owned by Fairmont).

More than a century later, a cross-Canada train trip is still one of the most coveted–and expensive–itineraries for visitors to Canada.

There’s no way to soften the hard facts: Canada’s vast size makes train travel one of the slowest and most expensive ways to see the country.

But it is also one of the most memorable.

Within Canada, VIA Rail and Rocky Mountaineer Railtours offer a number of tourist-friendly scenic train excursions year-round, with significant discounts available for off-season travel, and for students and seniors.

Between Canada and the U.S., Amtrak provides limited but regular service; the most scenic routes are between Oregon and Vancouver, and New York and Montreal.

>>Ready to plan your Canadian vacation? Use the search tool below to find cheap flights and accommodation!