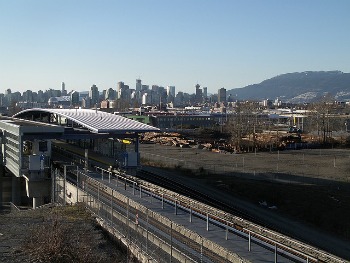 Getting around downtown Vancouver is not complicated thanks to an integrated network of bus, rail, and ferry service.

The downtown city center is surrounded by water on three sides and is fairly compact; you can walk from one end of downtown to the other in 30-45 minutes.

Public transportation in Vancouver is operated by TransLink and tickets can be used on any form of transport: bus, SkyTrain or SeaBus. A single fare is good for 90 minutes of travel in any direction. Fares are calculated by zone. If you stay within downtown, you’ll only travel within one zone. Heading to North Vancouver, Burnaby and Richmond will require a two-zone fare. There is a surcharge of $5 on single fares from the airport.

Fares also vary by time of day. Regular fares are $2.50 for one zone, $3.75 for two zones, and $5 for three zones. On weekdays after 6:30pm and all day on Saturday and Sunday and on holidays, prices are slightly lower- $2.50 for all zones.  If you plan on riding multiple times throughout the day, across more than one zone, a $9 day pass is the best value.

Day passes are good for a single day on each of the three systems. Day passes can be purchased around Vancouver, at most convenience stores like 7-11. Click here to search for a vendor.

Buses require exact coin fare. SkyTrain ticket machines accept coins (except pennies) and bills (up to $20), and most also accept debit and credit cards. Transit in Vancouver works on the honour system: your ticket won’t be checked each time you board the SkyTrain or SeaBus, but you are required to carry proof of payment at all times or face a fine of up to $173.

TransLink operates buses within Vancouver. All buses are wheelchair accessible and many carry bike racks. Bus routes around downtown Vancouver operate every few minutes during peak times; buses to the suburbs operate less frequently. The easiest way to map out your route is to plug your starting and ending locations into Google Maps or use TransLink’s TripPlanner.

The passenger-only ferry that connects downtown Vancouver and the City of North Vancouver is called the SeaBus. It travels between downtown Vancouver’s Waterfront Station (which is located a few blocks east of the Vancouver Convention Centre and Canada Place Cruise Ship terminal) and Lonsdale Quay on the coast of North Vancouver. It crosses the Burrard Inlet every 15 minutes during the day and every 30 minutes in the evening.

There are also two privately operated ferries travelling across False Creek, near Granville Island: AquaBus and False Creek Ferries. TransLink tickets are not valid on these small shuttles.

The SkyTrain is one of the best ways to see Vancouver, and is by far the easiest and cheapest way to get from the Vancouver airport to downtown. It’s the world’s longest automated light rapid transit system utilizing the world’s longest transit-only bridge, the SkyBridge. It’s not as helpful for getting around the downtown core, but if you want to get out of the city center and see more of Metro Vancouver, it’s an ideal way to go.