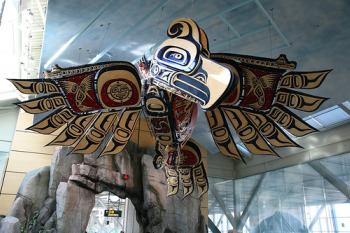 Vancouver International Airport (YVR) welcomes more than 16 million arrivals to Canada each year and is the largest gateway between Canada and Asia.

Despite the volume of flights it handles, it’s well laid out, organized and efficient. It’s also not hard to look at: the interior features one of the most extensive collections of Pacific Northwest Coast Native art in the world, there’s plenty of natural light, and arriving passengers are treated to a special welcome with soothing water features and birdsong.

The International and Domestic terminals are located in one building divided into two sections, and an additional South terminal serves mostly smaller regional carriers that fly within British Columbia. The International Terminal serves most US-bound flights and houses US Border Preclearance facilities (so passengers departing Vancouver for the US will actually clear US customs before they board the plane).

Airlines operating out of Vancouver International Airport include:

There are several bookstores, boutiques and duty-free shops located in each terminal, as well as a bank and currency exchange, pharmacy, and medical and dental clinics.

Getting to and from Vancouver International Airport

The International and Domestic terminals are served by the YVR–Airport Station of the Canada Line, one of the lines of Vancouver’s SkyTrain rapid transit network. Taxis and courtesy shuttles are also available.

>> more on getting to and from the airport to downtown Vancouver

>>how to find cheap flights to Vancouver