One of Canada’s oldest and most densely populated urban neighbourhoods, Vancouver‘s charming West End deserves a place on every first-time visitor‘s itinerary.

Roughly bracketed by English Bay, Stanley Park, Coal Harbour and the central business district, this pedestrian-friendly residential community reflects the tolerance, diversity and scenic beauty that Vancouver is famous for. 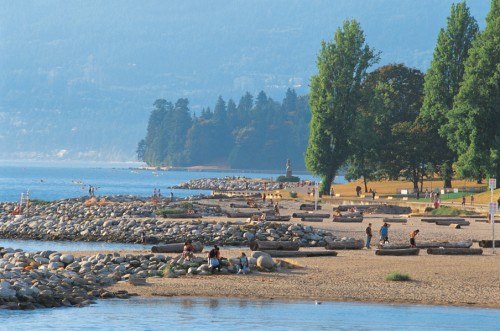 Just stroll the seawall on a sunny afternoon: here’s a same-sex couple pushing a baby stroller and carrying a sack of fresh veggies from the outdoor summer market; there’s a Japanese tour group accidentally blocking the bike lane in their picture-taking zeal; and there’s a harmless old stoner baking on a beach log beside a couple of dangerously blonde beach bunnies.

Getting to the West End:

Rule number 1: Don’t drive. Parking is a nightmare. It’s much easier to get to the West End by public transit (a 5 or 6 bus will take you right into the heart of the ‘hood from downtown, as will the water taxi shuttles from Granville Island) and then explore on foot, or by bike.

The simplest walking route from downtown Vancouver is simply to follow Robson Street west to Denman Street (about 20 minutes if the shop windows don’t get you first), or the seawall from the Convention Centre west towards Stanley Park (about half an hour).

Or for roughly $6/hr, you can rent a bike on Davie Street near Denman, on the seawall near the Convention Centre, or at the foot of Denman near the entrance to Stanley Park. There are bike paths all around and through the park, and the quiet residential streets are particularly bike-friendly.

Where to eat in the West End:

The U-shape formed by Davie, Denman and Robson Streets is a true foodie’s stroll. If you can’t find something to suit your palate here, you might as well give up and go home to boil up some Kraft Dinner. If you’re not sure what you’re hungry for, look for places with long line-ups outside the door–a sure sign that there’s something reliably delicious going on inside.

Ten different locals will give you 10 different answers to the question of which are the best West End restaurants, so consult widely–including these helpful mobile apps. My long-standing West End favourites include:

What to do in the West End:

Good to know about the West End: