I have worn a poppy on my coat every November since I was a child, but it was only during a recent visit to  Montreal, Quebec that I understood this to be a uniquely Canadian habit. An American tourist tapped me on the shoulder to ask, “Why is everyone wearing those little red flowers?” 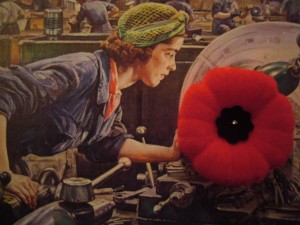 Since 1921, the Royal Canadian Legion has sold tens of millions of velveteen poppies in the weeks leading up to Remembrance Day–a national holiday–on November 11.

They’re available from street vendors for a small coin donation. Every year more than half of all Canadians pin one to their lapels to honour the generations of military men and women who have served their country.

It was, in fact, an American teacher who first proposed wearing a poppy as an act of remembrance.

As the Legion’s online history of the poppy campaign explains, Moina Michael had been inspired by Canadian medic John McCrae’s 1915 poem In Flanders Fields—a haunting tribute to his fallen WWI comrades buried in the poppy-strewn fields of Flanders, Belgium.

In communities across Canada, Remembrance Day is solemnly observed with a minute or two of silence at 11 am during neighbourhood cenotaph ceremonies, and even in some public spaces such as shops and airports.

Nova Scotian Terry Kelly’s beautiful music video, A Pittance of Time, conveys the intensely respectful mood of those memorials. I can never watch it without choking up.

Do you wear a poppy? Why or why not? Leave your thoughts below…