Vancouver is a bike-friendly city–and getting friendlier every year. 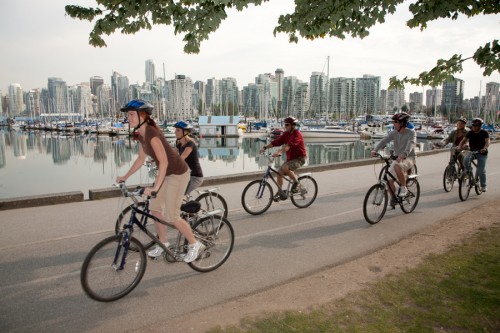 With the stated goal of becoming the world’s greenest city by 2020, Vancouver has made cycling a transportation priority.

It’s now easier than ever for cyclists to feel confident on city streets thanks to the extensive network of dedicated bike lanes that criss-cross the urban core. Two-wheel commuter traffic is growing slowly but steadily in Metro Vancouver.

Renting a bike is a great way to explore the city centre and surrounding neighbourhoods. For about $6/hour–or less for a day-rate–you can have the use of a late-model multi-speed cruiser bicycle from shops located throughout the city.
Look for concentrations of bike rental shops in the West End along Davie Street near English Bay; at the north end of Denman Street near the entrance to Stanley Park; and  along the Coal Harbour seawall near the convention centre. No reservations are necessary.