Breweries and Brewpubs in Halifax 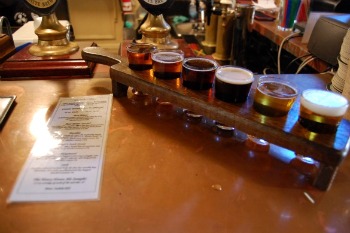 Looking for a good beer in Halifax? While the city is rumoured to have the most bars per capita of any town in North America not all nightspots are created equal.

For the best breweries and brewpubs to relax with a craft beer, check out the list below:

Henry House
Located in a house built in 1834, the Henry House is a cozy pub with a great beer selection and a wide range of food options. They offer six beers, brewed at nearby Granite brewing, including IPA, Best Bitter, and Keefe’s Irish Stout (sample six 3.5 ounce pours for $3.50). Menu items include local specialties such as fishcakes and pan-fried haddock, as well as pub favorites like burgers and fish and chips.

Maxwell’s Plum
Maxwell’s Plum boasts over 60 beers on tap and 90 more in bottles, so chances are you’ll be able to find your favorite beer here–or find a new one. Draft mugs start at $5.95, and range in size and price from a personal pitcher on up to the 80-oz. “brewtender” for $29.95. They also serve a standard selection of pub grub (chicken fingers, wings, burgers, nachos) which gets the tummy-filling job done without much flair. Service is mediocre and the vibe is more sports bar than pub, but it’s a great first stop for a few beers.

Hart & Thistle
With a prime position on the waterfront, Hart & Thistle is a relaxed place to enjoy a cold beer on a warm day. Serving imported and local beers, they also offer their own quality beer brewed onsite. Food options include sandwiches, burgers, steaks, pastas, pizzas, and a bevy of seafood choices including lobster, haddock, mussels, scallops, calamari and fish and chips.

The Foggy Goggle
The eclectic Foggy Goggle might leave you scratching your head when you fist arrive. With a mishmash of chairs and seating areas, a stage, and a long bar, it’s hard to tell just what it is supposed to be. But the end result is actually quite delightful. Comfortable and homey with a friendly staff, having a beer here feels like hanging out at a friend’s. The food menu ranges from portobello sandwiches to pulled pork to lobster mac-and-cheese, and offers several veggie and vegan options. Daily specials and an extensive beer menu that includes local favorites such as Propeller and Garrison make this an excellent spot for beer lovers. 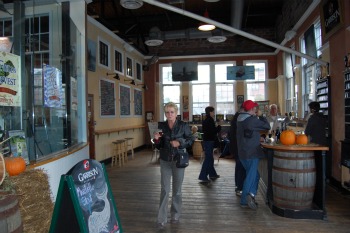 Garrison Brewing Co.
Garrison’s beers can be found at bars and restaurants all over Halifax, but you can also sample them at the source, at their small brewery along the waterfront. The open, light-filled space serves as tasting room, brewery, beer store and gift shop, so you can sample a few beers, take some to go and snag a Garrison pint glass while you’re at it. The tasting room staff are very knowledgeable and friendly, and each sample costs $2. Try the Tall Ship Amber, Irish Red Ale, HopYard Pale, Imperial IPA, But Brown Ale, Raspberry Wheat, or any number of seasonal specialties like the Baltic Porter or Martello Stout.

Propeller Brewery
Propeller doesn’t offer tours and tastings without an advance appointment, but you can pop into their store to pick up a few bottles to consume on your own (and ask for a few samples before you buy). Varieties include the IPA, Extra Special Bitter, Porter, IPA, Honey Wheat Ale, Ginger Beer, and several others, including seasonal favorite Pumpkin Ale.

Alexander Keith’s
Alexander Keith’s in the Budweiser of Nova Scotia (and actually it is owned by Labatt, a subsidiary of Anheuser–Busch InBev) in that it is the largest brewer in the province. If your tastes run more to microbrews than the mass-produced, you may not enjoy it, though a visit to the brewery is kitschy fun. Actors dressed in period clothes tell tales of Mr. Keith and walk visitors through the (no longer in use) brewing facilities in the original 1800s brewery. After the short tour, the guides tell jokes and sing songs while guests enjoy a pint or two.

>>And since it never hurts to have a joke to tell over a beer, here are some favourite jokes about Canada and Canadians…