There was plenty of speculation during the recent Royal Canadian Honeymoon about whether the Prince of Wales and Duchess of Cambridge would spend a night at one of Canada’s iconic “castle” hotels.

Made famous during the last century when the completion of a cross-country railway suddenly put Canada on the world’s tourism map, these imposing historic properties uphold a standard of hospitality from a more gracious age.

And while it turns out that Will and Kate chose something far more rustic for their romantic interlude in Canada, there’s nothing stopping wanna-be prince and princesses from enjoying their own fairy-tale moment at these elegant hotels.

From West to East: 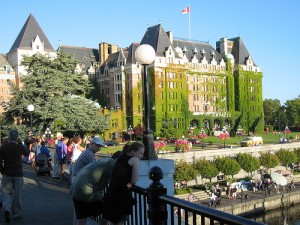 Fairmont Empress
With a prime location overlooking Victoria’s beautiful Inner Harbour, this regal old property has kept her pinky finger high since 1908. Today, the Empress is renowned for High Tea; more than 800 guests a day drop by for a cuppa and a cucumber sandwich. 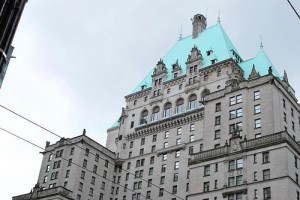 Fairmont Hotel Vancouver, Vancouver, BC
Ideally located in the heart of Vancouver, this hotel is instantly recognizable by its dramatic green roof. Opened in May 1939, just in time for the visit of King George VI and Queen Elizabeth, the sprawling downtown property is still Royal-worthy. 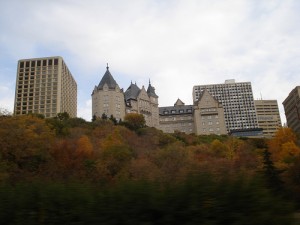 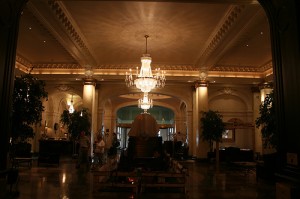 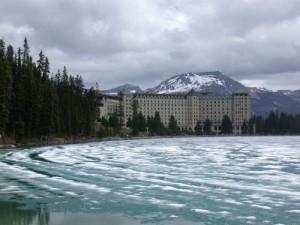 This hotel, located on the edge of Canada’s most photogenic lake, features in guidebooks and and postcard collections around the world. It was originally built to meet the demands of a summer clientele but has been a popular year-round vacation destination since 1982. 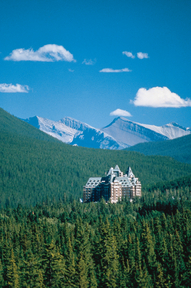 Fairmont Banff Springs, Banff, AB
This is the one that started it all: the construction of the Banff Springs Hotel in the heart of the Canadian Rockies in 1888 launched Canada’s modern tourism industry. Styled after a Scottish baronial castle, the hotel is a National Historical Site and a beloved emblem of Banff National Park, itself a UNESCO World Heritage Site. 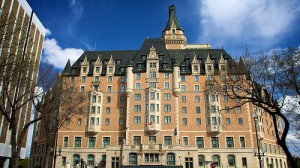 Delta Bessborough, Saskatoon, SK
“The Bess” is a much-loved historical landmark in downtown Saskatoon. The hotel will celebrate its 75h anniversary with tours and story-telling at an Open House event on Dec. 12, 2011–the public is invited to share their memories and experiences of the property. 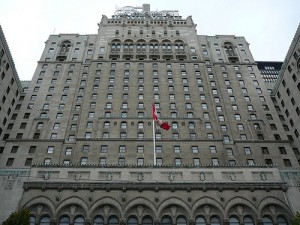 Fairmont Royal York, Toronto, ON
When it opened across the street from Union Station in 1929, the Royal York–with 28 floors–was the tallest building in the British Empire. Today, though dwarfed by surrounding skyscrapers in Canada’s largest metropolis, the gracious hotel is still a big player in Toronto’s hospitality and conference scene. 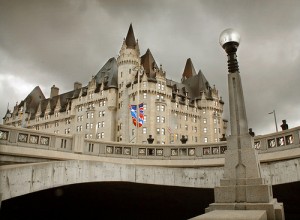 Fairmont Chateau Laurier, Ottawa, ON
The Château Laurier was constructed between 1909 and 1912 in tandem with Ottawa’s downtown Union Station (now the Government Conference Centre) across the street. On July 1, Canada’s birthday, locals know to make a late dinner reservation so they can enjoy prime fireworks-viewing from the dining terrace. 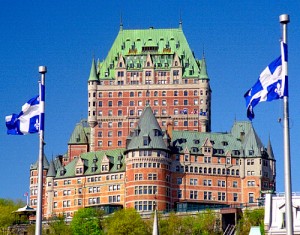 Fairmont Chateau Frontenac, Quebec City, PQ
The Chateau Frontenac gives Banff Springs a run for its money in the “most-photographed Canadian hotel” category. The hotel stands high on a bluff overlooking the mighty St. Lawrence River; for the best view of the hotel and the picturesque walled city–a UNESCO World Heritage Site–make the 10-minute ferry ride across the river to the suburb of Levis. 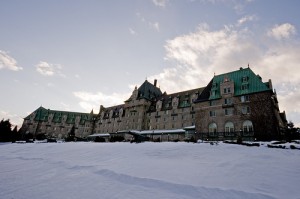 Fairmont Le Manoir Le Richelieu, Charlevoix, PQ
Since the 1760s, scenic Charlevoix has been a favourite recreational destination for outdoor enthusiasts. The original Le Manoir Richelieu hotel was built in 1899 atop the cliff of Pointe-au-Pic, overlooking the St. Lawrence River. With its excellent location and relaxed ambience, the manor continues to be popular with visitors from across Canada and the United States.